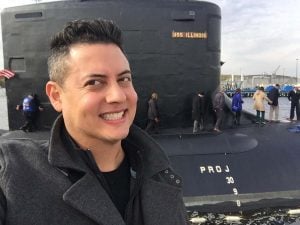 This past weekend I had the distinct honor and privilege to work for the First Lady of the United States, Michelle Obama.

The First Lady was taking part in a commissioning ceremony for the U.S. Navy attack submarine named for her home state of Illinois.

The submarine officially became the USS Illinois and begins active service after the ceremony  in Groton Connecticut.  This was a momentous occasion that I was a crucial part of as the Presidential Teleprompter operator for the event. 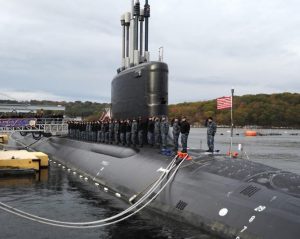 At the ceremony I was positioned teleprompting between the most deadly active nuclear submarine ever built by the U.S.military and Mrs. Obama. For two days straight there were multiple rehearsals, and many security clearance check points to get to my final set-up area in which I would be building the Presidential Teleprompter units to the left and right of the addressing podium, center stage for the ceremony.

As I built the intricate Presidential Teleprompter, I was carefully watched by a member of the Secret Service as well.

We used high NITS ultra-bright monitors as the event was held outside and the sun would be a huge factor in visual reflecting of the Teleprompter glass. I also spent quite a few hours sourcing sandbags to counterbalance the weight of the presidential pole set up. It was very windy at the Naval base and it was imperative I thought through and executed every fail safe. Every plug, two way splitter, power source and cabling was carefully gaffed down and after all the intense rehearsals and set up preparation, I was ready for war!

The First lady Michelle Obama was at the podium speaking.  Mrs. Obama said she was “beyond proud” to take part in a commissioning ceremony that the U.S. Navy attack submarine named for her home state of Illinois.

“Thank you for giving me the incredible privilege of being associated with you and with your families and with the Illinois for the rest of my life,” she told them.

“Working with our military community has been the biggest honor of my life,” she said, before going on board and touring the vessel.

Mrs. Obama’s speech was applauded highly and I felt an immediate sense of relief.   Mission success for American Movie Company and our professional teleprompting services!

*Cmdr. Jess Porter, the submarine’s commanding officer who also spoke at the event using our Presidential Teleprompters, compared having the first lady as the sponsor to having Babe Ruth on your team. He said her participation in the commissioning is “pretty monumental.”

Porter said the crew has worked tirelessly as the sub was built and their families have sacrificed – the ceremony recognizes those efforts and accomplishments.

“This warship is absolutely ready to go,” he said. “She’s a wonder.”

It took submarine supply businesses nationwide and thousands of shipyard employees in Connecticut, Rhode Island and Virginia to build the $2.7 billion submarine. Submarine builder Electric Boat, based in Groton, and Newport News Shipbuilding in Virginia build Virginia-class attack submarines under a team agreement and alternate the deliveries.

*Construction on the Illinois began in March 2011. The submarine was delivered to the Navy in August. The Navy has said the attack submarines are needed to replace those that were built during the Cold War and are retiring.

*At the event, Adm. John Richardson, Chief of Naval Operations, gave the order to commission the submarine, telling the audience of about 2,500 that the “powerful warship” will strike fear into the hearts of the nation’s enemies and bring warm reassurance to allies and partners. His flag and the submarine’s commissioning pennant were raised, signaling that the submarine can be tasked to conduct Navy missions as an active member of the submarine force.

“You’re needed on station and there’s not a moment to lose,” Richardson told the crew.

It will be about another two years before its first deployment. The Illinois will undergo additional testing in the shipyard before it begins the process of getting certified for its maiden deployment.

*The submarine has a redesigned bow with two large tubes to launch Tomahawk missiles, instead of 12 smaller tubes. The larger tubes were designed so the Navy would have the flexibility to also launch future weapons and unmanned vehicles, according to Electric Boat.

*U.S. Sen. Richard Blumenthal, a Connecticut Democrat, called the vessel “a technological wonder that will help keep us safe and safeguard our freedom.”